The tentative three-year contract is a huge win for musicians who record under the SLRA, which sets minimum wage scales and working conditions for audio recordings—both studio sessions and live performances. When ratified, musicians will see improved pension and healthcare contributions, and 3% wage increases in each year of the contract.

With music consumption transitioning away from CDs and downloads, we fought hard to connect our residual and pension funding to streaming. For the first time, the SLRA obligates the companies to contribute a portion of interactive streaming revenue to our Sound Recording Special Payments Fund (SPF) and the Music Performance Trust Fund (MPTF). New provisions also require the companies to make substantial guaranteed annual payments to the AFM & Employers’ Pension Fund (AFM-EPF) from streaming.

In the coming weeks, musicians who work under the SLRA will receive a ratification letter and voting information about this new and improved contract. Negotiations are not always an easy or quick process, but when musicians stand together—we have the power to do anything!

Join us for a lively discussion of current affairs, post-production tax credits and what the future may hold for organized labor.

Light refreshments will be served

“Do we have royalties for you?”

RMA-NY thanks the DiMenna Center, home to the finest “big room” in NYC for orchestral recording.

Rank and file musicians and union reps will be gathered in NY for record negotiations. Join us for casual conversation and food with players from New York, Los Angeles and Nashville!

What: Local 802 AFM and the Society of Composers and Lyricists (NY) welcome you to attend a joint workshop on recording in New York with a special focus on film scoring and initiatives to bring more film scoring work to New York City.

will join us for conversation and information

RMA members are the most recorded musicians in the world –

come check us out!

If you care about the economic rights of artists in the digital domain, join us in hijacking Spotify’s new twitter hashtag campaign! We can go viral! We already are getting noticed!

http://www.deathandtaxesmag.com/229269/spotifys-twitter-campaign-got-hijacked-by-people-demanding-fair-pay/
Got your own numbers to share?
Like so: Fun with new Spotify hashtag campaign: “#thatsongwhen10k people listened, the artist got paid $60 and the major labels got stock options.”
We do believe in digital. But current rates are not sustainable. Spotify is using our music like venture capital and promising better returns later while they pay their employees and hire expensive ad firms to create the above hashtag campaign.
Below are a bunch of sample tweets you can use, and we encourage you to make up your own with your own true stories of royalties from Spotify. Also use #supportartistrights if possible. We’ve heard putting the hashtag at the beginning of the tweet isn’t as effective. Retweeting is great too but we need new original tweeters!Thank you!
CCC-NYC
w/ #supportartistrights:
Unsustainable royalties kill off indie. Behold the future: #thatsongwhenstream only means mainstream#supportartistsrights
#thatsongwhen Artists are viewed as bottom feeder “content providers” whose main job is facilitate ad revenues #supportartistsrights
Spotify says they r aware if global opinion not good they’re “&^%$#@”#thatsongwhen artist voices ARE a global opinion #supportartistsrights
Ready for corporate playlists?#thatsongwhen Unsustainable rates = NO indie. NO rebels. NO diversity. NO soul. #supportartistsrights
MT @artistempathy #thatsongwhen#Spotify told artists to wait 4 better payouts while using r music 4 venture capital #supportartistsrights
#ThatSongWhen 5 Important Questions For #Spotify from Artists & Managers That Need to be Asked#supportartistsrightshttp://bit.ly/1v2q9iY
On piracy:
Pirates caused song value to tank:#thatsongwhen Spotify cashed in at the margin, offering content of drowning artists for pennies.
can you add double time claps for that first barSpotify says founder Daniel Ek ONLY did tech for pirate uTorrent.#thatsongwhen Ek opened door to thieves; then sold artists a new”lock.”
On the economics:
Why not share EQUITY w/artists? Spotify built on venture capital of our music. If we can afford 2 create more#thatsongwhen everyone wins.
#thatsongwhen Music delivers joy to fans, nice profits to corporations, and a pittance to the artisthttp://bit.ly/1oISofu
#thatsongwhen Listeners deserve to know that streaming rates are unsustainable
A war on artists is a war on the culture of the 99%.‪ #thatsongwhenthe only songs created will be by corporations. Hello ‪@OccupyWallSt?
Better payouts? ‪#thatsongwhen I realized Spotify told artists to wait even as they use our music as venture capital for their paychecks.
Wrap yourself in this corporate warm/fuzzy – #thatsongwhen Spotify proved the emotional power of song but forgot the artists who created it
Fun with new Spotify hashtag campaign: ‪#thatsongwhen 10k people listened, the artist got paid $60 and the major labels got stock options.
On indie/niche genres:
Fun with new Spotify hashtag campaign: [insert song name here]‪#thatsongwhen artist royalties were so low indie creators lost their future.
It’s about reduction. Reduction of royalties. Reduction of a group to one artist. #thatsongwhen no one knew who was in John Coltrane’s band
The math just doesn’t add up.#thatsongwhen indie artists & niche artists squeezed out by streaming and can’t afford to make new recordings.
Roseanne Cash, Local 802 member, is urging Congress for better protection of intellectual property rights in the digital age.  She says about inequality in the music industry: “The generation that’s growing up thinks music should be free. I’m willing to have that conversation when artists aren’t the only ones who aren’t being paid for the music. Right now, a lot of corporations and multi-billion dollar companies make money off the music and the artists don’t see that money.”
https://hereandnow.wbur.org/2014/06/26/rosanne-cash-music-licensing

On June 21st, the RMA-NY helped the CCC (Content Creators Coalition) protest Google’s new planned unfair treatment of artists and content creators online.  Google had threatened to block indie artists from YouTube if they did not sign away their rights under a contract that would pay far below acceptable rates.  The protest had an immediate effect and Google has postponed its decision in hopes of reaching a deal with the indie record labels.

Photos from the protest: 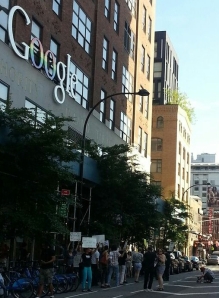 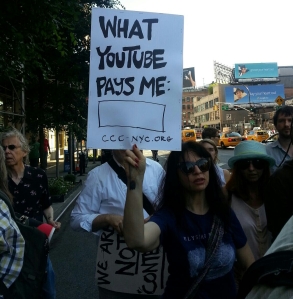